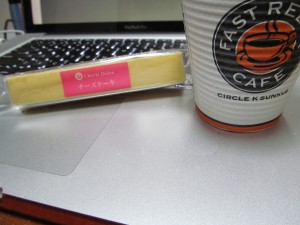 its cheesecake that’s delicious as fuq and only costs… 105円！

I have to admit, I’ve been failing with the blog updates.

Though, I came to realize that I’ve fallen victim to the conbini.

The Conbini on the other hand is a wonderland of mashed up fuckery that can only be explained with one word: Japan.

Japan is a society on the go and the conbini facilitates this innate life style the Japanese have adapted over the span of a little over 150 years. Unless you’re a housewife with three children hanging off your every limb, you will be at the conbini buying your dinner, your liquor, a banana or two, some desert, a porno mag, maybe a quick snack from the hot box, pay off that cell phone bill, and maybe some shampoo and soap for the bath you’re about to take at that business hotel seeing how you never wanna go home to your wife and kids.

The conbini is the all in one stop and go that sells everything – even clothes. You can even buy socks at the conbini.

But the think that makes conbinis the conbini is the food. Cooked right on the premises, more times than likely, you’re gonna get a nice hot meal for about under 500円. You won’t score a steak but you’ll get some hot dogs on a stick (yes, on a stick), karaage, meat buns, fried potatos (not ‘french’ fries), and about anything else that can be deep fried and left to sit under a hot lamp till sold.

Seasonally, the conbinis will roll out certain foods. Like, recently all the conbinis have begun selling udon. You pick your bowl size, give it to the employee, and tell them what you want. Sometimes its ice milk (not ‘ice cream’) and sometimes its food based upon a campaign (like Family Mart’s recent Hatsune Miku campaign or Seven Eleven’s Eight Rangers summer campaign).

Then there’s the standard bentos, onigiri, salads, sandwiches, wraps, and the infamous aisle dedicated to nasty ass bread stuffed with anything the Japanese can think of. If you want normal bread, good luck, because the Japanese don’t believe in just leaving the bread alone. They have to stuff it with something — anything — sweet. Extremely annoying since I absolutely hate stuffed… anything.

I have an addiction to Circle K’s cheesecake, Lawson’s Karagekun (regular), and 7/11’s ham & cheese wrap. All delicious and under 300円, its disgustingly fatting and delicious all at the same time. Considering I don’t eat my school’s lunches due to my absolute distate for anything from the sea (and the Japanese method of cooking fish just makes it even more ew), the conbini has been my lunch buddy for the past month and a half. While, I’m not an adventurous eater willing to try anything, what I have tried has been pretty good and surprisingly better than what you can score in the United States.

But that’s because conbinis are not only competing with each other, but with other local restaurant establishments. Majority of your 7/11 commercials pride themselves on the fact that you can get a home cooked meal at their stores rather than going to a restaurant or, hell, cooking it yourself. The conbini is a way of life here that transcends anything imaginable in the United States. It’s how come 7/11 was bought out by it’s Japanese branch; the Japanese way of life managed to make an American-owned store bigger than it’s actual American counterpart.

Whether you want to accept it or not, the conbini will become a central part of your life in Japan. You’d be surprised how much you can get done at a conbini for a hefty price (convenience stores are not cheap, but that’s what you’re paying for — i suppose). Just be prepared for them and don’t fall pray to their surprisingly good food.