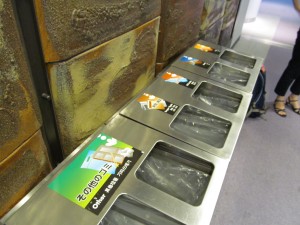 … until you come to Japan. Then you are reminded of the frustration that is separating garbage into ‘categories’ such as burnables, pet bottles, paper, plastic, aluminium cans, etc, etc, etc.

In America, we simply throw everything into one trash can. Recycling is an option that we have if we want to reduce our carbon footprint on the earth. But, in Japan, you have to split your garbage and you are required to recycle. Apparently the word is that Japan doesn’t have enough land for landfills so they must burn their garbage and recycle everything else… which is why there’s so many ~Go Green! Be eco!~ ad campaigns out there.

It’s a frustrating pain in the ass.

The garbage system is ridiculous and if you’re a dirty American like me, its a hassle and a half. I have plastic battles pilled in a bag, paper scattered everywhere, and two containers overfilled with cans and plastics. Burnable garbage can go out twice a week but recyclables are assigned certain days in the month. Some getting picked up twice while others only get picked up once a month.

When I arrived in my town, on the first day I was given three large sheets of paper explaining the city’s garbage system. Three big sheets of paper that I still have no clue on what category styrofoam falls under.

Not to say there aren’t facilities out there where you can dump them. There are but they’re far and they close when I get off of work, so it defeats their purpose for working people like me. I had to spend an entire lunch break to just get rid of my cardboard boxes.

…. Did you also know that at fast food restaurants, you don’t simply throw your cup out. You dump the liquids out the cup first, then you throw it out.

Now, of course, people say… Just throw it in with the burnables! But you can’t. I’m a public official and a foreigner. If some person gets an itch to be neighborly and check the garbage, if they come across my bag, I’ll probably get reprimanded at work for failing to be a mindful citizen because of a citizen complaint (it has happened to others at the office).

There are also no garbage cans in the streets. So if you drink something at the million plus one vending machines in town, you’re stuck holding on to that bottle until you find an establishment with a trash can specifically for pet bottles. Be sure to throw the label and plastic cap in the plastics container because they don’t belong in the pet container.

Japan isn’t a bad country. I love it here. But their quest to being eco friendly is seriously complicated for no particular reason than to probably relieve the work off of the garbage people. Or something.