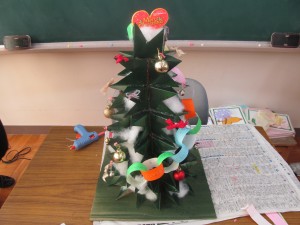 its a xmas tree.

Last week was my last week of teaching the Elementary kids till the school year. As Christmas is rolling right around the corner, I thought (as well as every other damned ALT in the country) that doing a Xmas lesson would be a fun activity for the kids to do that didn’t involve me having to spaz in front of them trying to explain why you can’t say ” This is a apple. ”

” Why do you have to say ANU instead of AH “

” I DON’T KNOW, TIMMY. WHY DO YOU KEEP ASKING ME QUESTIONS? “

Anyway, the Xmas lessons were going splendidly. We made Christmas trees and listened to Christmas music. The kids even were able to make Christmas cards to give to their friends and family. Until, of course, I arrived at the Ghetto School.

Ghetto School is a whole breed of itself. My mountain children are so nice and smart and wonderful and refreshingly just like adorable little children. I think the  abundance of fresh air, abundance of trees, dying villages and populations consisting of old people, coupled with isolation from civilization shields these childrens from the bastardization and corruption of normal society. Ghetto School is in the city and of course probably corrupted and going stir crazy in their concrete jungle. Trees? What’s that? I never heard of such things!

These crazy assumptions is how I cope with realities of my situation.

So, because having these kids construct a Xmas tree would be a logistic nightmare on all levels, I simply had them create Xmas Cards. The first class of my day, which tends to be my worst, were surprisingly good. I think the fact that they were able to play arts and crafts for an hour lowered their douchebaggery levels significantly. My second class was, of course, great in comparison to the other classes of it’s grade.

Then there was the final set of fifth graders.

Now, they’re usually pretty dead. They sort of just breath air and stare at the board. Usually their interests in English depends on how pissed off their homeroom teacher is for the day. But that day… that day… they decided to be cheeky and interested in the lesson. My Xmas lesson started as the previous ones; hey kids, it’s xmas! yay! do you know xmas! oh really! that’s great, timmy! now guess what, we don’t eat xmas cake in america! i know right, i’m pretty shocked too!

But when I go to the KFC is pretty much normal in America and is far better than this fake imitation you got here, Christmas Cake is seriously just a product of your twisted interpretations of Xmas, and we get a shitton of gifts, one of the boys stood up.

Just, like, decided to stand up. Face the class, and I swear to God, said, ” JAPANESE SUCK BECAUSE WE DON’T GET A LOT OF PRESENTS. I THINK THE JAPANESE SHOULD DIE. ”

Let’s just say, things got really awkward after that.

My life as an Elementary school teacher in Japan. You can’t make this shit up.