Two more days before I spend nearly a half week knee deep in orientations.

My fellow Group A JET friends have been in Tokyo for two days now and are probably at some seminar as I write this entry. They’ve been keeping our group updated on what is going on and how it’s like. It seems like a rush of like everything. Sort of like, from the sounds of it, a convention on crack.

I don’t know how people are managing to go out and party. I am those people that need sleep and get irritable when I don’t sleep. I have a feeling I’m going to spend half of TO sleeping.

Anyway, I really do hope I enjoy TO and my first experience in Japan. I hope I don’t get slammed with culture shock. D:

Todaaaaaaaay, I need to put some final touches on all my accounts and stuff. Then it’s just finishing my packing my TO stuff and putting in stuff that didn’t fit my suitcase in the TO bag and putting stuff in a boxes to be shipped to my place that didn’t fit in either suitcases.

I’m still worried about what I’m going to do once I arrive in my city. I have no schedule or nothing. I assume I’m just gonna float in and eventually find my apartment and then float to the BoE or something. Maybe if I look frantic enough someone will like, idk, tell me what I gotta do. I got my school schedule… Maybe I go to the schools? I have not a single clue.

I swear, once I arrive, I am going to be in for such a huge surprise. I hate surprises.

Though, maybe when I arrive, I’ll just instinctively know what to do. Like, the secret chip they implant in all us JETs as we enter the Keio Plaza Hotel will be switched on to Tape Recorder mode and we just automatically kick into JET mode.

I still prefer to have a schedule.

I got photos of my apartment except its not my apartment its the other new JET’s apartment but I’m moving above her. I don’t feel comfortable posting those pictures so here’s world class artistic representation that would make Pollack cry in envy. 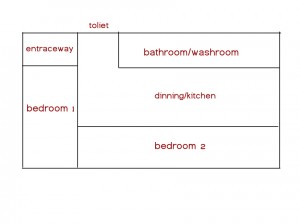 As you can see from this highly detailed image, I have a genkan and two bedrooms and a dinning/kitchen area and a toliet and a bathroom/washroom. I thought I was getting a hole in the wall but I am quite surprised I got all of that apartment space. Especially for 48,000 a month. Ballin’.

These entries are bland as hell. lol